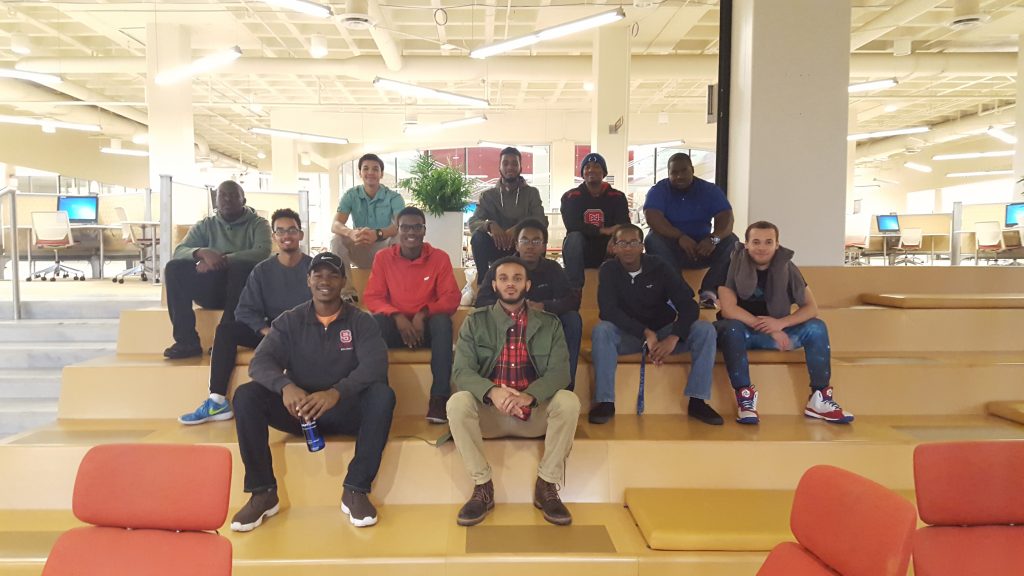 NC State’s campus is a welcoming place. When students arrive in August, they’re quickly and  enthusiastically ushered into the Wolfpack by faculty and staff, resident mentors and advisors, and soon-to-be new friends. From the very beginning, there’s a place for everyone.

But no matter how warm the welcome, it still takes time to fully embrace the experience.

Creating a sense of community and belonging requires some time and effort. For most students, it takes building a solid group of friends or discovering an activity to dive into or a space in which to thrive before they can really begin to think of this university as home. For young Black men who are still trying to determine where and how they will fit into the campus community, that disconnect can feel even greater.

By the time Joseph Reynolds was entering his second year at NC State, he was familiar with the campus and had already made some solid connections. But something hadn’t quite clicked yet. He wasn’t as engaged on campus as he had hoped. So when staff members in his residence hall invited him to join the Black Male Initiative (BMI), he figured if nothing else, it was an opportunity to get more involved and to form some new friendships. 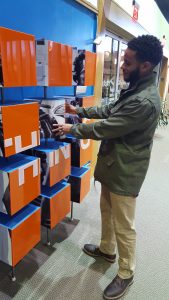 Almost three years later, Reynolds is an NC State graduate, and he was more engaged during his time on campus than he ever could have imagined. He’s well known across campus as a leader, and he’s a respected source of wisdom for his peers. Some of that stems from his undeniably charismatic personality — he has a noticeable optimism, and a sense of curiosity about the world. But as he’s quick to acknowledge, a big part of his academic and personal growth can be attributed to the BMI.

“Success is something that is relative. It varies from person to person. It’s academic excellence, but a major component is also personal growth….Complete student success is the start to better understanding yourself.”

Four years ago, the BMI was a group meeting casually to bring outreach and awareness and cultural appreciation activities to a small group of Black male students. At that time it was known as the African American Male Initiative; the name was later changed to better reflect the group’s membership, which includes men of multiple African Diasporas. Today, thanks to the insight and efforts of program staff and founding members like Reynolds, the program has grown beyond recognition. It’s evolved into one of NC State’s newest Living and Learning Villages, providing mentorship, leadership experience, cultural enrichment opportunities, and a residential component that is already helping to build a bond with the depth of a brotherhood between participants.

Twenty-five BMI members currently reside in Avent Ferry Complex, with designated space available to eventually accommodate as many as 38 students. CJ Jackson, the East Campus Assistant Director who is responsible for the overall vision and execution of the BMI program goals, looks forward to seeing the initiative grow even further, while continuing to improve graduation rates for Black male students. “Graduation rates for black males have been disproportionately lower than the graduation rates of their peers for years. While NC State has been able to reduce that gap, there is still more work to do,” says Jackson. “I see us continuing to grow in numbers, and in the value we bring to the university by assisting in raising the number of graduates who identify as Black males.”

Now that it’s been officially designated a Living and Learning Village, the BMI has increased efforts to proactively recruit new participants, beginning as early as high school. The Love of Education Academy, for example, gives BMI participants the opportunity to share their journey to college while supporting other Black men in their pursuit of higher education. Led by students, the academy invites a group of high school and community college students to campus for two days to test drive the university experience. Academy participants are given the chance to experience university-level coursework, taking part in lectures, taking notes and completing required reading assignments just as they would if they were enrolled at NC State. They’re given a taste for the university as a whole, with opportunities to also participate in the social aspects that make college such a memorable experience. Through such programming, the BMI hopes to see an increase in the number of Black males who choose to pursue a college career at NC State.

Jackson, along with program coordinator and residence director Qwen Ballard, also works to connect with those who are currently on campus but may be unaware that the program is available to them. Recruiting these students is organic — it can be as simple as sitting down with a group of young men in a dining hall or Talley Student Union and starting a conversation.

While the BMI staff has certainly been successful in its efforts to bring in new members, the strongest recruiters for the BMI are without question its current participants. These are the guys who can speak to what the experience has meant to them personally and academically; how they’ve seen themselves grow along with the program. Rarely are 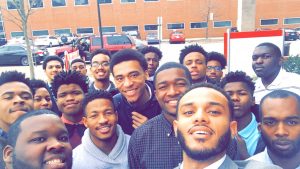 they seen on campus outside of the company of another BMI student. Students are assigned to “families” headed by student leaders — Black male RAs and returning students like Reynolds. They study and eat together, and just hang out together in Avent Ferry. It’s not a requirement of the program; it’s simply a natural progression of the bond that has developed between BMI students.

For CJ Jackson, graduation is the ultimate measure of student success, and it’s the direction he’s confident his students are headed — last year BMI members earned an average GPA of 3.37. But beyond academics, he’s eager to also see students grow as individuals, stressing that, “We don’t want to see them be the same person they were when they came to us.” Reynolds echoes this thought, reflecting on his own growth over the past four years. “Success is something that is relative. It varies from person to person. It’s academic excellence, but a major component is also personal growth: mentally; for some, spiritually; and being able to come in with one mindset but to leave with there having been positive changes. Complete student success is the start to better understanding yourself.”

As a University Housing strategic plan initiative, the BMI follows the logic that so many of a student’s most instrumental experiences take place outside of the traditional classroom. As Jackson also points out, participation in opportunities like the BMI directly impact their persistence to graduation. “Research says that students who are deeply engaged in their higher education experience are more likely to graduate. This initiative helps Black males become connected and engaged in activities and high impact practices that aid them in graduating from NC State.” It’s clear that the BMI is proving successful in helping students prepare for the future. Reynolds’ experience with the BMI was instrumental in helping him secure an internship opportunity in Stuttgart, Germany with the management and engineering consultancy group P3. On campus, other participants have sought out leadership positions within student organizations and as RAs. Others have been selected for co-op and internship opportunities, affording them the opportunity to get a head start on gaining the real-world experience they’ll need to be competitively recruited after graduation.

“Joe is a phenomenal leader. Professionally he has been a model leader, making the right decision whether it is popular amongst his peers or not.”

Joseph Reynolds is ready to say goodbye to NC State, and to the initiative that he’s helped grow from little more than a student activity hosting a handful of events each year, to a full-fledged Living and Learning Village. He’s not certain where the future will take him, although his options are varied and many. His internship with P3 reaffirmed his passion for mechanical engineering — he gained experience in the automotive division doing human machine interface testing — but he’s also passionate about people, and diverse cultures. He’s inspired to use his talents to make a difference for someone, somewhere and has also considered the possibility of moving abroad to teach English in South Korea.

Reynolds will absolutely make a difference wherever he goes. With his personality and integrity, he’s made an indelible mark at NC State. “Joe is a phenomenal leader”, says Jackson. “I admire the way he is respected by so many. He’s taken advantage of opportunities we don’t often hear about Black males participating in, like study abroad. Personally he is someone you want in your circle. His perspective is amazing; committing himself and others to seeing all angles of an issue. Professionally he has been a model leader, making the right decision whether it is popular amongst his peers or not.”

When Joseph Reynolds leaves NC State, he’ll be taking a degree from the College of Engineering, and countless meaningful memories and experiences from his time with the BMI. He’s excelled academically and has built the connection to the campus that he was hoping to find three years ago.

He’s ready to go out into the world, and change it for the better.

See highlights from departments and programs that are making the first year experience memorable and successful for NC State students.

The Home of Student Success

By: Susan Poulos NC State University’s innovative and long-standing approach to whole student success is built into the entire college experience. In recent years, this commitment is even stronger than ever. The NC State experience

Summer Start: A Season of Transition

EcoVillagers Explore Sustainability Outside of the Classroom

Colin Moore joined the Wolfpack last fall as a first-year student in computer science. He is one of 100 students in the EcoVillage, which is located in Bragaw Hall. Students, or EcoVillagers as they’re called,