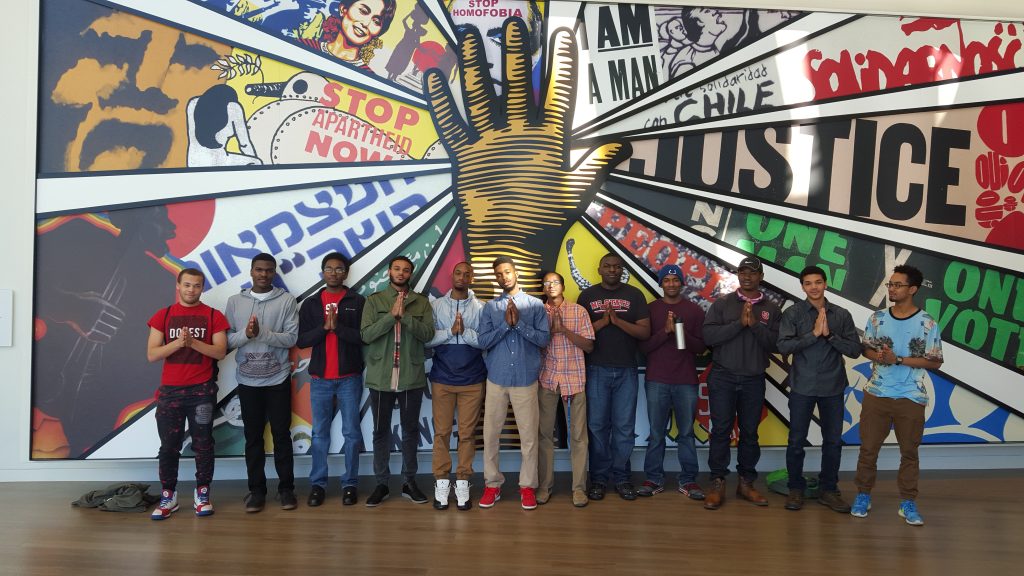 Student success is at the forefront of everything we do at NC State.

A recent study by Education Trust shows that we are on the right track to doing just that. Inside Higher Ed published an article this past March discussing the study’s main finding: “… most public colleges have improved overall graduation rates during the last decade…but gaps between the academic success of black students and that of white students continue to widen.”

At most public colleges. But, not at NC State.

Because, as the article points out, at NC State “…graduation rates for black students improved by 12.5 percentage points over 10 years, narrowing the gap between black students and white students to 10 points.”

Michael Coombes, Director, New Student Programs, Division of Academic and Student Affairs, explains that in addition to narrowing the graduation gap, NC State has also been retaining black students at a higher rate than white students. “Black students report feeling a sense of community at rates comparable to other groups on campus,” he explains. “It may indicate their level of social or emotional connection to NC State which, according to research, plays a critical role in their success on a given campus.”

While these statistics are promising, the goal is to eradicate the gap altogether. Coombes, along with others on campus, provide programming aimed at making that happen.

“In order to graduate students, we need to ensure their persistence to their third semester as a starting place for their success in later years.”

For starters, New Student Orientation. It gives students a place to connect with other students and faculty and staff and provides students with resources to aid in their success both inside and outside the classroom. “Its strategic initiatives include sessions that stress social connections between students, to begin the process of building meaningful relationships within their academic college, the integration of high impact practices to increase student engagement in activities that research has shown promotes academic, social, and emotional success, and programs that more directly address the cultural and environmental expectations present on our campus,” explains Coombes.

Wolfpack Welcome Week (WWW), held at the start of the school year to help students continue to build a strong sense of community, includes such signature events as Convocation and Respect the Pack. At Convocation, new students are officially welcomed to campus, and at Respect the Pack, students, staff, faculty, and administration join together to paint messages of inclusion in the atrium of Talley Student Union. Cultural and leadership opportunities are also highlighted during WWW through events hosted by the African American Cultural Center and the National Pan-Hellenic Council. 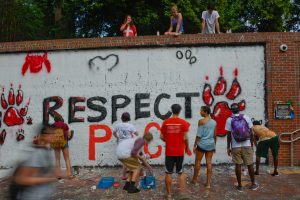 Students ready the Free Expression tunnel for the Respect the Pack event.

“These events, taken individually or as a whole, promote the successful transition, academically, socially, culturally, of our African American students into NC State and higher education,” further notes Coombes. Findings from education researchers agree. In a pilot experiment in 2012, recently featured in the New York Times, psychology education researcher David Yeager found that messaging focused on belonging and reinforcing the idea that studying makes a difference truly did make all the difference. The messaging meant a cut in the gap.

“Every college freshman – rich or poor, white or minority, first-generation or legacy – experiences academic setbacks and awkward moments when they feel like they don’t belong. But white students and wealthy students and students with college-graduate parents tend not to take those moments too seriously or too personally,” the article notes. “It is only students facing the particular fears and anxieties and experiences of exclusion that come with being a minority – whether by race or class – who are susceptible to this problem. Those students often misinterpret temporary setbacks as a permanent indication that they can’t succeed or don’t belong.”

What Yeager’s research indicates is that with critical messaging at the time of transition, this problem becomes less of one for minority students, and it’s the basis for much of our programming. “In order to graduate students, we need to ensure their persistence to their third semester as a starting place for their success in later years,” echoes Coombes. “Their success in their first year is vital to continuing their path to graduation.”

Due to the extensive programming available within the Division of Academic and Student Affairs, we are delivering the critical message when it is needed. Our student success achievement gap is beginning to close, but we will not stop until it is completely gone.