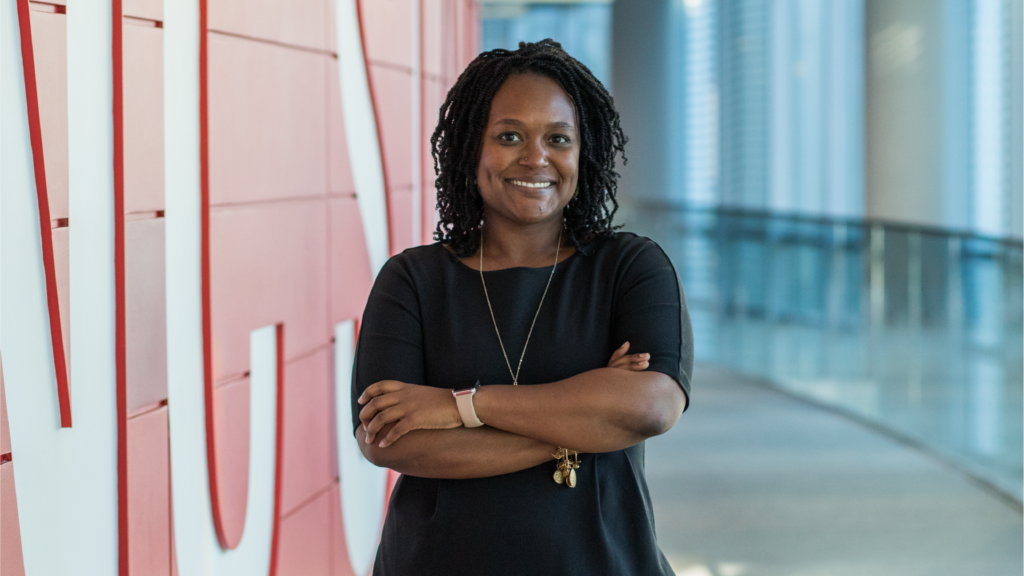 The Chancellor’s Creating Community Awards highlights the most outstanding faculty member, staff member, student, student organization, and college or division for contributions in the areas of diversity, equity and inclusion.

“This award means the work of people who came before me and those who labor to do this work on a daily basis, is creating positive change in our community,” said Melissa Green, Director of the NC State Center for Student Leadership, Ethics and Public Service (CSLEPS) after receiving the Chancellor’s Creating Community Award for Outstanding Staff.

Green was awarded the honor during the Chancellor’s Creating Community Awards ceremony on April 26, 2018, for her contributions to diversity, equity, and inclusion during the past year. “There is no such thing as a single-issue struggle because we do not live single-issue lives,” quoted Green, referencing a comment from Audre Lorde during a 1982 address titled, “Learning from the 60s.” Green says those words are ones she lives by and they empower her to continue engaging in her work. 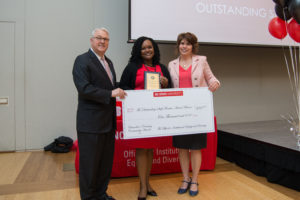 “As Director of CSLEPS, my work is centered around leadership and civic engagement, and there is no such thing as a single-issue struggle,” said Green, “Whether we are working to address food insecurity on campus, exploring voter engagement and education, examining our intersecting identities in relation to power, privilege, and oppression, or doing work around access to affordable housing, there are absolutely no single-issue struggles.”

NC State Chancellor Randy Woodson and the Interim Vice Provost for Institutional Equity and Diversity, Sheri Schwab, presented the awards during the ceremony in the Piedmont-Mountains Ballroom of Talley Student Union. Sarah Wright was the Honorable Mention for the Outstanding Staff Award. Winners received a monetary bonus for their respective departments. Nominations from all across the NC State community were reviewed, including Green’s nominations from both Chelsea Doub and Asia King.

My time at NC State has been transformed by being developed, challenged, and encouraged by Melissa.

“She has truly shown me what it means to be a leader and to push past just meeting the bare minimum in the areas of equity, diversity, and inclusion,” said Doub, “She has created the space for both students and staff to talk about these areas in a critical fashion.”

Green hopes the award will stretch further than just the ceremony, making an impact across the campus and allowing others to realize they, too, have a key role to play. Green says it’s the responsibility of educators and agents of NC State to continue working toward a strong environment of diversity, inclusion, and social justice.

“We cannot assume or hope that this work should only be the responsibility of the Office of Institutional Equity and Diversity (OIED), those with diversity and inclusion as a central responsibility of their position, or those from historically marginalized or oppressed backgrounds,” said Green. “We must support each other in this work and stand in solidarity with one another as we do it.”

Green began her career as a resident director at the University of Illinois at Urbana-Champaign where she says she first explored student leadership development. She later returned for a stint at her alma mater, Western Michigan University, gaining a comprehensive leadership portfolio before arriving at NC State in 2010. Green has been in her current role, director of CSLEPS, for the past three years.

“Melissa comes to work every day with the mentality of fostering an environment that is inclusive for all students,” said King, “Simply put, Melissa is a severely underrated social justice rockstar. She has been a force not only within CSLEPS, but within the Division of Academic and Student Affairs (DASA) and the NC State Community. It is a privilege to be mentored by her.”

The Center for Student Leadership, Ethics and Public Service is housed under the Division of Academic and Student Affairs (DASA) at NC State. The division and its many programs aim to promote the success of the whole student.

As the national program director for Juntos, Urieta – along with North Carolina Program Director Juana Hernandez and a slew of NC State University partners and volunteers – aims to help Latino high school students and their families navigate the challenging road to higher education.