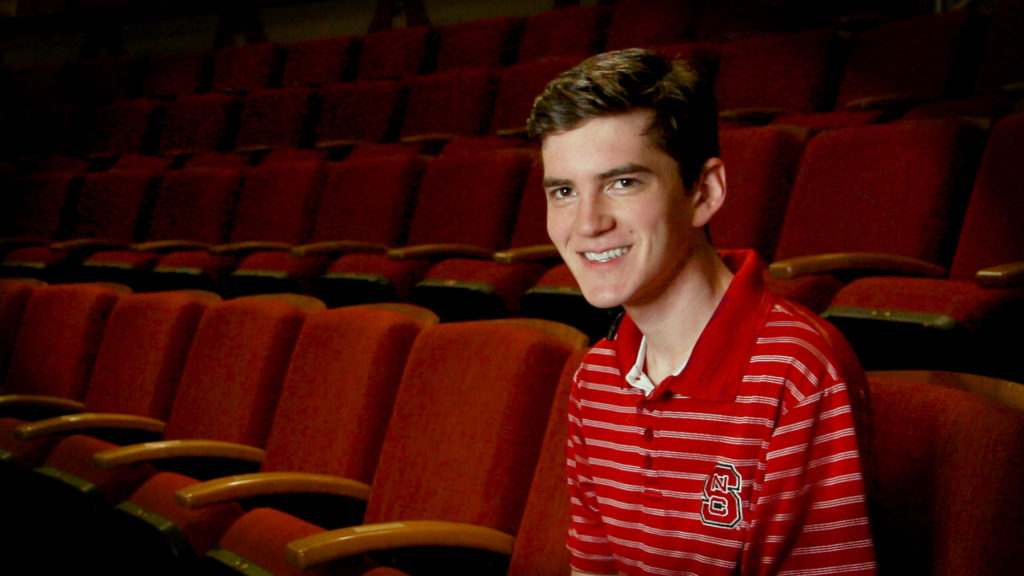 “It was the tiniest little thing,” said Mitchell Moravec, pointing to the armrest of the theatre chair, adorned with a brass plate and names of those who donated to the Arts NC State program. “That was the very first thing that made me think, ‘Ok, there are people who donate back to the program and who support the arts.”

The epiphany came to Moravec as he watched his first Arts NC State performance as a new undergraduate in the University Scholars Program at NC State. “Going out to an arts event really started me on a course to get involved with Arts NC State and, especially, University Theatre,” said Moravec.

We sat in the Titmus Theatre in the famed Thompson Hall, reminiscing about performances directed by the beloved John McIlwee, the University Theatre director who recently announced his retirement after 31 years at NC State. Moravec was in the audience during McIlwee’s final big musical as director – Hairspray – and remembers McIlwee’s departing speech.

“Being able to see his last show, combined with me thinking about my last time at NC State as an undergrad… definitely a lot of feelings,” said Moravec, taking a moment to pause before continuing, “What it comes down to is that I’m very grateful for what the arts did for me.”

To come out and watch a show, or get lost in the stories of what they put on, really gave me the opportunity to fall in love with the arts here at NC State.

As both a psychology and material science major, Moravec never aspired to be on the stage. Instead, Arts NC State was his getaway during those stressful days. “To take a break during the week,” he said, “To come out and watch a show, or get lost in the stories of what they put on, really gave me the opportunity to fall in love with the arts here at NC State.”

As his college career progressed, Moravec would go on to participate in NC State’s Student Government, becoming the Student Senate President and serving on the Friends of Arts NC State (FANS) board. While on the FANS board, Moravec broadened his understanding of arts beyond that of an audience member. With this involvement came a newfound understanding of philanthropy and its importance in continuing the mission of something bigger. For Moravec, that something was the John C. McIlwee Theatre Endowment.

Established in 2001, gifts to the John C. McIlwee Theatre Endowment are invested and produce annual income to support University Theatre for years to come. The endowment honors the decades of dedication John McIlwee gave to the University Theatre and Arts NC State.

“It’s a really great way to network with the arts community, really passionate people from the Raleigh community who wanted to step up and do more for Arts NC State,” said Moravec.

As part of the graduating class of 2018, Moravec says he’s spent his remaining time at NC State looking back at his growth and looking forward at his future which, he says, couldn’t be what it is today without Arts NC State.

In recognition of McIlwee’s retirement, Arts NC State aims to double the John C. McIlwee Endowment of $100,000. Moravec’s student gift will go a long way in sustaining programs for Arts NC State. Will you join him and make a gift?

Each Spring semester, the signature Career Connections event aims to help students identify resources and opportunities around campus and beyond to support the pursuit of their career goals, as well as help them make an informed decision on a major.